The vow of silence is one of the more attention-getting vows of abnegation one can make. The vow of chastity, by comparison, is difficult to detect at all unless the abjuring party deliberately makes it public, whereas the vow of poverty, though more visible in its effect, may look to a casual eye like ordinary bad luck. When you sit down for a chat with a vower of silence, however, you notice almost immediately that you are the one doing all the talking, and soon enough you guess the reason. Yes, pathological muteness has to be considered first — even Walt claims not to consciously court embarrassment — but once it has been ruled out, a diagnosis of silence-vow can be made with confidence. Even then, you should hesitate briefly before branding the non-locutor a passive-aggressive wanker.

That’s because making a vow of silence is a popular path to spiritual progress, a thing favored in many of our most popular systems of entrenched superstition. By introducing stillness into one’s life, the vow of silence allows one to perceive more keenly the voice of God, or the rhythms of the universe, or the televangelist on the TV in the next apartment. Trappists and Trappistines, the 4,000 or so monks and nuns of the Order of Cistercians of the Strict Observance, are so well-known for vowing silence that they practically own the idea, but in fact most of them don’t go all the way: they just live quietly and use sign language where possible. They make good neighbors.

They also make good beer, both for their own use and as a product whose sale supports their monasteries. According to today’s Wikipedia, the famed “Westvleteren 12”, brewed by Trappist monks at the Westvleteren monastery in Belgium, “is often considered to be the single best beer in the world”. It is one of only six Belgian beers allowed to sport the “Authentic Trappist Product” logo.

The monks of Westvleteren distribute the beer from the monastery to customers — individuals only, no resellers — who have succeeded in obtaining a reservation to buy some. To do this they must use a telephone system that the monastery website cheerfully upholds as a model of customer hostility. “Please take into account that you may often get a busy signal when you call to make a reservation, due to the fact that our beer lines are overburdened! You’re not the only one who is calling at that moment. Due to our small-scale production, the number of telephone calls is much greater than the number of available reservations. That means it’s a matter of having a lot of patience as well as a lot of luck.” And that was just the warm-up. Click the link for full instructions, or if you want to feel better about your current beer supply. 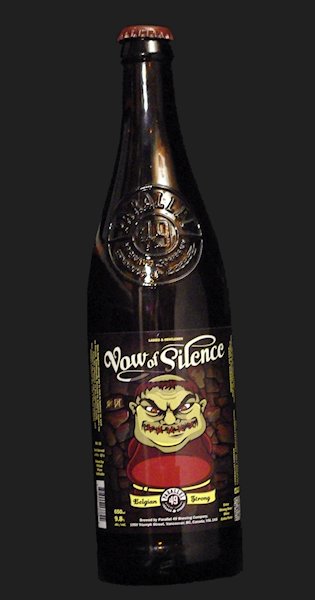 Meanwhile, right here in British Columbia, we create our own spiritually nourishing beverages, such as the bottle pictured at right, which was brought out by the Parallel 49 Brewing Company of Vancouver. Their Vow of Silence brand was probably a one-off; it doesn’t seem to be part of their current line-up. Perhaps no one thought it was the best beer in the world. The heavy Belgian-style brew has a label depicting an ogreish monk. His mouth is sewn shut, a provision that would seem to render any vow superfluous. At first glance, you could take the criss-cross stitches on his mouth for a moustache. In combination with the spectacular beetling eyebrows, this gives him a striking resemblance to Inspector Frost, that is, the British television actor David Jason.

The Vow of Silence bottle, empty now for several years, makes a guest appearance in the video for my song Vow Of Silence, which comes out today along with the sheet music for the piano arrangement. The beer it once contained might not have been quite the authentic Trappist product, but that’s okay. I doubt the song is really about a vow of silence as such.