Leaving aside my own material, many of the songs I play most often were written by Long Dead Songwriter, whose body has returned to Nature, and whose works have flown up to join the Public Domain, typically unsigned. Among his and her remarkably prolific output, L.D. Songwriter has left us ballads, folk dances, Wild West and bush songs, children’s songs, campfire songs, marching and sailing songs, gospel songs, love songs, work songs, right-to-work songs, and let’s stop there for brevity.

One who has studied L.D.’s works more deeply than most is the man Walt calls Bill Dobbin. It was among his recordings that I first came across several of the traditional and old-time songs I still sometimes play, like the transportation ballad Jim Jones.

An early album of Dobbin’s introduced me to Alberta. Perhaps he liked it for the same reasons I do, that it’s pleasant to hear and easy to play. Lots of others have recorded the song as well, including Burl Ives, Jerry Silverman, and — this name caught my eye — Pernell Roberts, on his album Come All Ye Fair And Tender Ladies in 1963. Wasn’t Pernell Roberts on Bonanza? And secondarily, did you ever meet anyone named Pernell?

However that may be, today is Dobbin’s birthday, so I thought I’d mark the occasion appropriately by presenting another of L.D.’s songs that we both play, Alberta. It’s perhaps not the most socially advanced song ever written: the first verse amounts to a bald and scurrilous offer, while the other two are spent whining. In short, it’s a pretty standard lust pitch from Unimproved 19th Century Man. If you just let the words go sailing by without unnecessary thought, however, the lyric is actually quite nice. 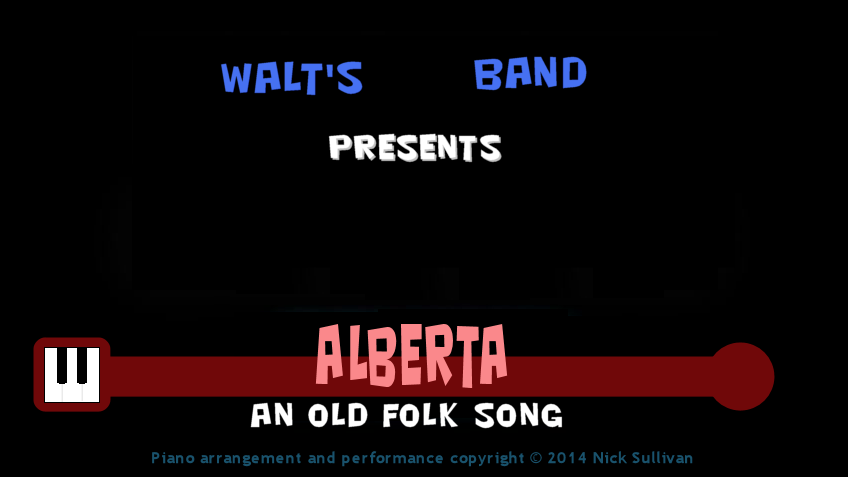 I’ve made an easy piano arrangement of the song, which you are welcome to download and play. It should appear along with the other sheet music available for you to download when you visit your Dashboard page, even if you aren’t a member of the site, or aren’t logged in. The video above shows me playing and singing the same arrangement. I hope you enjoy it, and please join me now in wishing many happy returns to B.D.

P.S. If you think yourself an expert with regard to Dobbin’s lyrics, today would be a good day to demonstrate your prowess by attempting this challenging quiz, which is celebrating its own 5th birthday today, on TriviaPark.com.

Nice to see the real piano, also shows that some songs stay folk even when played on the music machine. It is very folk of you to transform the lyrics to your own taste as well. When poking around I found "hair hang low" (al la Bill Dobbin on his famous "Photograph of Myself" album) and "hair hang long" in about equal numbers, but no other "hair hang down".

This song was also claimed by Leadbelly who "wrote" four variations.

The very first trace of "Alberta, Let Your Hair Hang Low" is a song collected by Mary Wheeler in Western Kentucky and published in 1944 in her book Steamboatin' Days, Folk Songs Of The River Packet Era. This has the lyrics employed by Dobbin.

Doc Watson has a wonderful version on his 1966 "Southbound" album which can be found on http://batlyrics.net/alberta-lyrics-doc_watson.html

As a P.S. my friend Ed Cole would have turned 73 just more than a month before Bob on April 14.