Eternally yours, for now

The only thing that makes the Universe at all interesting is the diffusion of energy from places where it is concentrated to places where it is rarefied. That’s what Science reveals, much to our pleasure and amusement. Unfortunately, as Science also points out, every tiny thermodynamic transaction gobbles up another sliver of the remaining interest and brings us a step closer to the dreary unstoppable dénouement where all the energy just sits around and never does anything again.

One bright side of entropic exhaustion is that it sets some kind of limit, and hence adds some kind of testability, to the hoary, pre-scientific idea of eternal commitment. We can now say that people whose feelings of love last long enough to be extinguished only by universal heat death have done their bit. They have satisfied any reasonable standard of steadfastness, and you couldn’t expect more. Someone who promises to love you longer than that, Science hints, might be playing you for a sucker. On the other hand, “I’ll love you always” can lose a lot of its affective impact if burdened with too many caveats. Science seems to have nothing to say about that.

Today’s song, Pledge, takes the form of a promise of eternal devotion, one that merrily oversteps the bounds of moderation just delineated. It is as over the top as a good pledge should be. It recognizes no human reality except the desire for exceedingly long-term emotional security. It expresses itself in absolutes, and for a good reason. Absolutes are easier to write. 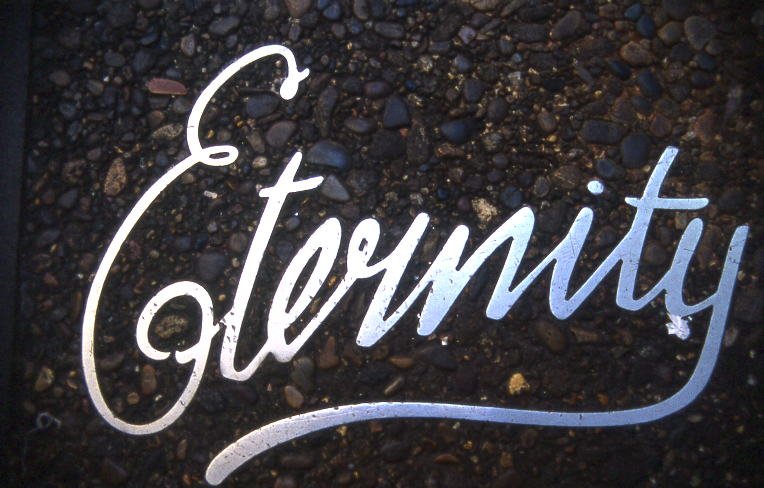 When I was growing up in suburban Sydney, one of the staple satisfactions of our occasional trips to town was a sighting of the word “Eternity”, immaculately written in white chalk on the sidewalk. The writer was a local man named Arthur Malcolm Stace (1884-1967), who rose from excruciatingly humble circumstances to become the virtually unknown weird guy who wrote “Eternity” on the sidewalk half a million times, then at last achieved minor renown as an icon of Australian eccentricity. I won’t spoil Wikipedia’s informative article on Stace for you any further than to mention that as a young man he served “as a scout for his sisters’ brothels”. And that for him, Eternity was all about the god known in some circles as God.

God doesn’t come into Pledge (if you really want him in, singing “Amen!” at the end should do the trick — it’s that kind of tune), but it would still make a fine song for your next wedding, especially if some kind of commitment is involved. I don’t know if we’ve mentioned that Walt believes in Love, ever since absinthe made his heart grow fonder, but when he’s drunk he actually does a pretty good Maurice Chevalier. Want some proof? Well, if you and your partner sing Pledge to each other as part of your nuptial rites, out loud and on video, Walt will grudgingly waive all performance royalties! Bless Walt!

Susan and I were reading this this morning and She wanted to say - Hi Maurice ! Great blog. Loved the bit about Stace. I am always amazed by your fund of facts. Jim is playing Pledge in my ear - I must go. Amen